Children’s Magician Steve Baker’s 45 minute magic shows are highly interactive and family friendly for birthdays or any party anywhere in Ontario: from Toronto to Cornwall or from Oakville to Sudbury and anywhere in between!

(Also includes a small gift for the birthday child and candy treats for all the kids.) Choose one of several comical characters including: The Great Steverino, Professor I. M. Confused, The Wiz, Abraca-Dracula, or Pirate Pete the Prestidigitator! 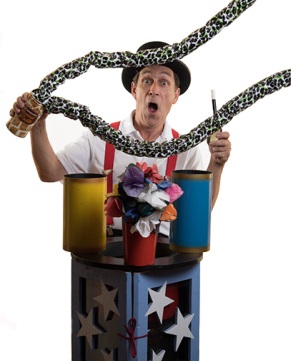 The traditional top hat look of children’s magician The Great Steverino bridges the gap of young and old making this character the perfect choice for any party. His highly interactive stage shows provide lots of laughs with a wide variety of illusions tailored to the audience. The high quality of magic makes this show just as entertaining for adults as it is to children. Some of the effects you might see include: Comedy Chains and Shackles escapes; magic vanishing balls; the unbelievable cut and restore newspaper, the impossible card trick and many more!

Pirate Pete gets the kids involved in a magical hunt for buried treasure, teaches them the “ropes” that make a sea worthy pirate, and introduces them to his magical balloon parrot. Fun and laughs for the whole family, as Pirate Pete magically escapes his captors like Harry Houdini. 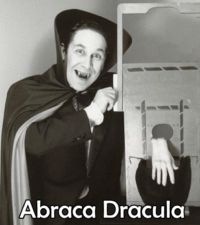 Silly, spooky, Hallowe’en magic for any age with all of Steve’s best illusions. Funny, not scary!

“The Wiz” following the popularity of Harry Potter comes to parties in search of young “wizards in waiting”. Kids are invited to test their magical powers by assisting The Wiz in magical demonstrations of astrology, alchemy, second sight and shape shifting. 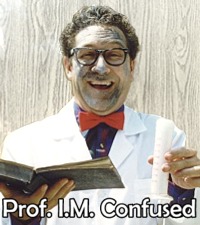 A wacky science guy magic show with Professor I.M. Confused leading the audience through science and magic to explore principals of gravity, electricity, air pressure, light and motion. A magical show of fun and discovery that asks the question, “Is that Science or Magic?”

Experience a front row look at some of the world’s finest illusions as Children’s Magician Steve strolls among the crowd or performs right at your table. A good magician will tell you that this is the art of magic at its finest. You will be within reach of the artist while he risks his most valuable secrets and gets “close-up!” Tuxedo, Western, Pirate, Victorian or other characters available.